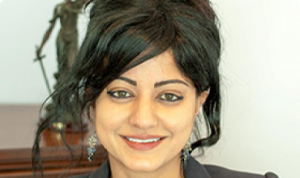 Sumeya Mulla joined the firm in June 2016. She graduated with a Master of Laws (LL.M.) in International Legal Studies from New York University (NYU) School of Law in May 2015, and a law degree from the University of Windsor, Faculty of Law in 2012.

Sumeya has clerked with the judges of the Federal Court of Canada in Ottawa for more than a year, where she gained a thorough exposure to judicial review applications of immigration and refugee files along with constitutional challenges launched in the Federal Court. She has also clerked for the judges of the Supreme Court of the Northwest Territories where she gained exposure to criminal and civil litigation in Canadian courts. She has worked on large-scale litigation files during her time at the Department of Justice Canada, and prosecuted offences at the City of Ottawa, Legal Services. As a law student, Sumeya spent time as a caseworker with the Windsor Community Legal Clinic where she assisted in the representation of disadvantaged communities.

Sumeya regularly appears before the Federal Court of Canada in Applications for Judicial Review and Motions. She is also involved in a wide range of immigration and refugee files including admissibility proceedings, refugee claims, applications for permanent residence based on humanitarian and compassionate grounds, pre-removal risk assessments, and sponsorships.